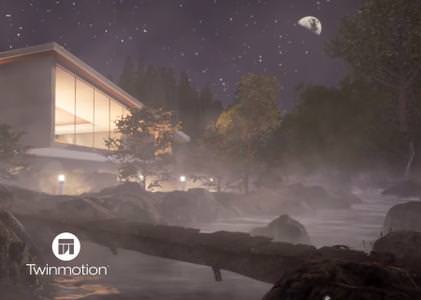 Info:
Note to people who keep reporting trojan, the rls works as reported by people on forum, trojan is a false positive from the patch by tpcrew-group.

Twinmotion 2019 has been developed for architectural, construction, urban planning and landscaping professionals, regardless of the size and complexity of their project, their equipment, their computer skills or their modeler. Powered by award-winning Unreal Engine, Twinmotion 2019 boasts a highly intuitive interface, which makes it extremely easy to learn and navigate.
VR exploration
Compatible with VR (virtual reality) headsets HTC Vive, Oculus Rift and Gear VR, Twinmotion 2019 allows you to explore your model in real-time, from the early design phase to the final project review.

Media
Twinmotion 2019 is the only software on the market capable of producing in real-time not only stereoscopic images, panoramas and videos of the highest quality, but also 360? videos.

BIMmotion
BIMmotion is a self-executable (mono or stereoscopic) file that can be shared free of charge, which integrates the project you have imagined, allowing everyone to move in 3D, freely or according to a pre-defined path.

iVisit360
This online service allows you to directly upload the images, panoramas and videos calculated in Twinmotion to be shared, combined and organized in a project.

Import all 3D models
Twinmotion is compatible with virtually every 3D modeler on the market in FBX, SKP, C4D and OBJ formats. You can also merge several Twinmotion projects or other formats into one, and to enrich your projects, import images in DDS, PNG, PSD, JPG, TGA formats.

This patch brings a number of corrections, including: