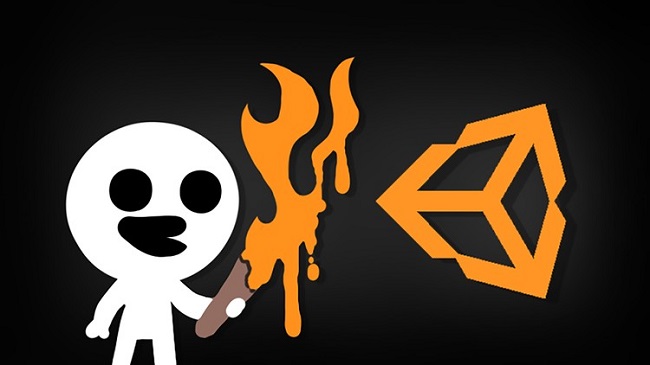 Info:
Description
In this game development course you’ll learn how to create a commercial quality 2D action game using Unity, C# and a 2D application like Photoshop or Gimp (whatever 2D drawing tool you have installed on your computer).

Here is a list of the key things you will learn by watching this course :

First of all you’ll have a stronger understanding of what it takes to actually finish a game from A to Z in Unity!

You’ll learn how to sketch and paint 2D game characters, then import those creations inside of Unity, rig them and finally make game animations such as run cycles, attack animations, idle animations and more !

Learn how to make a player character than can move around an environment and shoot projectiles by programming in C# !

Create various enemy game characters : a melee monster that runs fast towards the player and leaps at him to attack | A spooky necromancer that summons small, vicious skeletons that chase after the player | a dangerous bat that shoots dark fireballs at the game’s hero !

Understand how to use state machine behaviors to create a multi stage boss fight in Unity!

Make multiple weapons the player can equip and use against the game’s various foes. As well as a health pickup !

Create fun sound effects using Audacity and then implement those inside of your game !

You’ll learn how to make a nice main menu with responsive, animated UI !

Publish your finished game to Itch io, Newgrounds or Gamejolt !

Why learn from us ?

Me and my brother created this course to share our passion for making games and help others bring their unique visions to life !
We’ve been teaching aspiring game developers how to use Unity, code with C# programming language and make game art and animations. Our tutorials have been viewed by thousands and are very popular, every day we get dozens of developers thanking us for helping them out on their own game dev journey !

We’ve not only made tons of tutorials but we’ve also created plenty games using Unity, both 2D and 3D !
So we know what it’s like to create a complete, polished experience from A to Z, and really want to equip you with the right tools and knowledge so you can do the same !

One comment on “Udemy ? Game Development/Art : Create a 2D Action Game with Unity/C#”