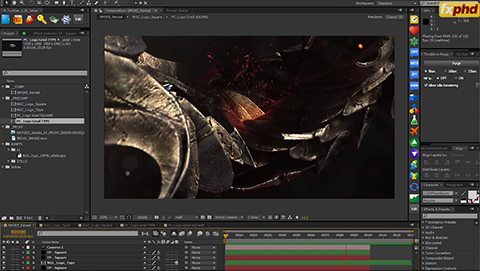 Info:
Working at Imaginary Forces, prof Ryan Summers has completed an array of motion graphics jobs over the last 12 months. From main-on-end sequences for films like Pacific Rim to the opening titles of shows like Person of Interest, he found two constants: tight timelines that require you to work fast and clients that need you to stay flexible to the end.

Using After Effects and Cinema 4D, as well as leveraging the power of plugins like Trapcode Form and Particular, Summers will show you how he achieved both in real-world projects for a variety of clients. To be clear, this course isn?t a lightweight ?making of? breakdown for these projects ? but will be sharing hard core production-proven techniques for getting the job done.

Ryan Summers is a 3D artist that has recently completed projects such as Strife: Rook, Pacific Rim, and Person of Interest. He escaped a life of science after rewatching Jurassic Park and Toy Story back to back, quitting a promising career as a chemical engineer to go off and learn to animate. He’s worked on kids cartoons, slot machines, and short-form documentaries before finding a home at Imaginary Forces as a director.

Prof Frederick Ross concludes the final 3 classes of this course.
course syllabus
Class 1: Trapcode Particular, Fast and Furious. One of the things that you get asked to do as a motion graphics artist is end tags. There will always be another end tag to complete and there is rarely enough time to do something cool. For the introductory class, we discuss how I used Trapcode Particular to generate a transition that is both fast to create and flexible for multiple uses. And then I show you how to link it to data from Cinema 4D so you can integrate it with your CG renders. Examples will include a National Geographic spot as well as a teaser for Elder Scrolls Online.
Class 2: Lightning in a Bottle. Building on the techniques learned in Class 01, we learn how to iterate our Particular effects quickly and cumulatively. Initially designed for a long-form pharmaceutical commercial, we work through how to use standard AE effects like Turbulent Displace, Beam, CC Vector Blur, and Echo to rapidly look dev for clients.
Class 3: Stage Five Project Breakdown, Part 01. After a few weeks in After Effects, we start to spend some more time in Cinema 4D. For this we break down the Stage Five ID project. We learn how to deconstruct text, build it back together, and elaborate on the earlier example on how to send and manipulate 3D data in After Effects.
Class 4: Stage Five Project Breakdown, Part 02. Once we’ve got our basic structure for the Stage Five ID project down in Cinema 4D, it’s now time to make it sing. We’ll look at using our old friend Trapcode Particular along with Trapcode Form to enhance the environment we built in the previous class.
Class 5: Person of Interest Project Breakdown, Part 01. For a project that was initially only supposed to be type over image, Person of Interest sure did get pretty complicated. This week will be about creating systems that can do lots of work for you, freeing you up to spend more time designing the bigger challenges. We will go through how to create a self-animating UI grid, as well as some tracking techniques.
Class 6: Person of Interest Project Breakdown, Part 02. We never were going to move the camera in Person Of Interest, nor were we going to have many 3D elements. If you’ve seen the opening, you’ll note that we did plenty of the opposite. See how we were able to leverage client assets along with Trapcode Form and some simple camera moves to add enough production value to a project to actually here the client say the word “bitching” for the first time ever.
Class 7: Failure. The Big F. We’ll take a look at a pitch project and look at where we went wrong and the lessons learned along the way
Class 8: Prof Frederick Ross: Amazon Whispersync: In the superhero world of Steelheart we go from reading the ebook to listening to the audiobook on a mobile device seamlessly. Were going to take a look at using custom particles to add complexity while staying within our short deadline. I?ll also show you how we use the animatic to break out all our actual AE projects to keep the team working smoothly and in the same structure, which is really critical to turning around projects quickly.
Class 9: Prof Frederick Ross: Tesla OpenSource: Imagining a world where anyone can make and drive an electric car without barriers. Were going to look at setting up, using, and syncing scripts to accelerate our mograph animation, and with everyone able to reuse the animation pieces across the entire spot, we essentially cut our amount of animation in half.
Class 10: Prof Frederick Ross: Covered California: The most common thing we end up doing day to day is roto and keying. Were going to take a look at some advanced luma keying we came up with for working with a wide variety of off white backgrounds while maintaining high standards with a short turn around.