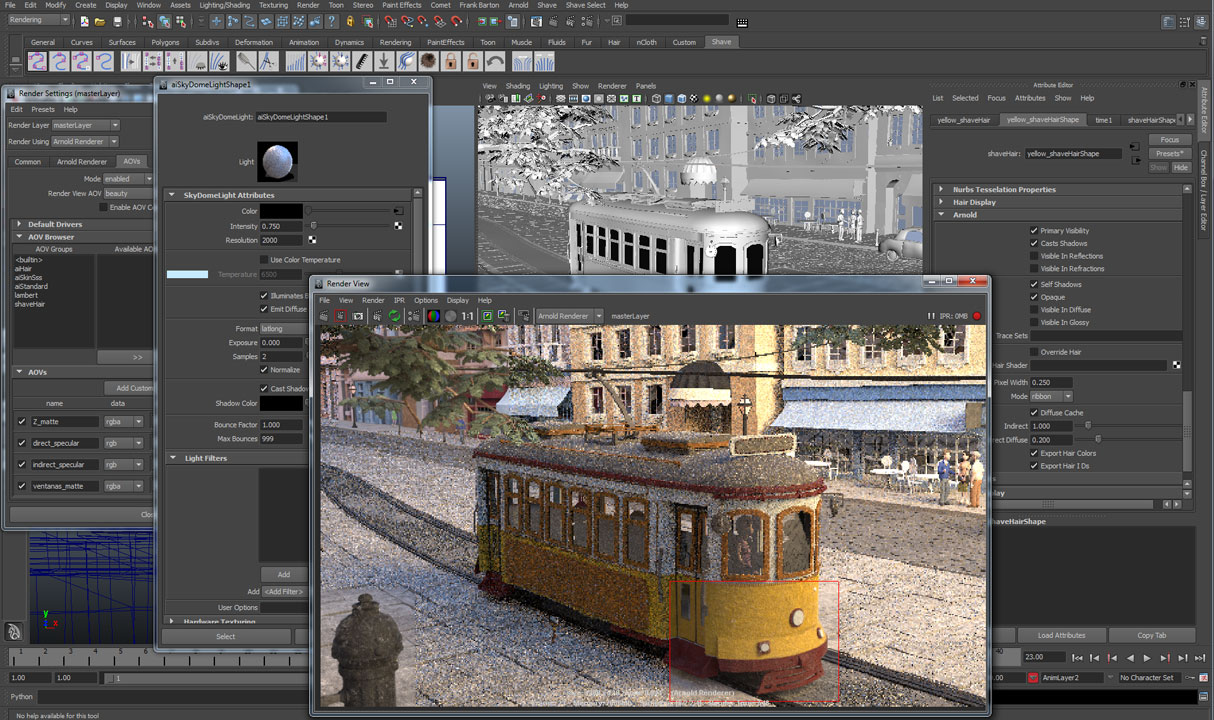 MtoA 1.4.1 addresses important issues regarding the Texture Workflow. A few more IPR fixes have been done, as well as some improvements in the Arnold RenderView.
Windows users will no longer have to run the installer twice to update MtoA.

Use Existing TX was always expecting an existing TX file to be present, and failed otherwise
TxManager was tagging files with (tx) even if the .TX file didn’t exist
Supporting multiple tokens with and
UDIM textures could disappear from the render during render sessions
TxManager didn’t find all UDIM textures in “Mari” mode
Swatch render of non-tiled textures could crash maya
Tx Manager appeared at the top left of the screen and couldn’t be moved
Fixed bug with conflicting color spaces (Maya 2017)
Color Management wasn’t supported in arnold Image nodes (Maya 2017)
TxManager could apply the operations to the wrong textures when referenced by multiple nodes
Optionally show full paths in TxManager (turned off by default)
Swatch render now supports “use existing tx” for faster display

It is now possible to open the Arnold RenderView without starting the render (it might be necessary to clear maya preferences to see the new shelf icon)
The viewer is no longer resized when “Update Full Scene” is used
Gamma/Exposure weren’t working with OCIO in Maya 2015/2016
Added Debug shading mode “lighting” rendering the scene as a white lambert
Implemented “lock selection” option for isolate selected, in order to ignore the selection changes
Fixed the exposure toolbar button so that it correctly resets it to 0
Added optional gamma icon in the toolbar (not enabled by default)
Added right-click menu in RGBA icon
Added 1:1 icon in toolbar for “Real size” menu
Added shortcut ‘I’ for “Display Pixel Information”

When selecting a mesh and doing “Arnold->Light->Mesh light”, it now creates a new type of light in Maya that references the selected shape. This allow to see the light in Maya UIs like Light Editor, Light-linking Editor, etc… and make it consistent with other types of Arnold Lights. The previous system (changing mesh parameter “translator” to “mesh_light”) is still supported but is now considered as deprecated and will be removed in the long-term future.

With this export option, all shading groups are exported (or only the selected ones during export selected), even if they’re not assigned to any geometry in the scene. This prevents from assigning the shaders to dummy geometries for export as it could be done in the past.

Installer no longer needs to be executed twice to uninstall/reinstall MtoA.
Standins couldn’t be selected along with other shapes.
Fixed possible slowdown during batch render
Instanced shapes can now be exported with “Export Selected”
Improved oriented curves mode: The oriented curves mode will now produce an actual 3D surface when rendering, making it more suitable for shapes like grass and feathers. This replaces the previous behavior that was based on the 2D ribbon mode.
Faster minimum pixel width: min_pixel_width for curves and points is now significantly faster in certain situations.
Light portal mode: skydome lights now have a portal_mode parameter with options off, interior_only and interior_exterior to respectively turn off portals, block any light outside portals for interior only scenes, and let light outside portals through for mixed interior and exterior scenes.

Light Temperature color calculation has been corrected, with a white point now at 6500K (used to be 5500K because of the incorrect color space). This will change the behaviour of existing scenes using this option.
An option “Legacy Temperature” in the Render Settings (Tab “Lights”) allows to restore the previous behaviour.
Restored behaviour of LOD Visibility as it was before 1.4.0 : disabling it hides geometries from the viewport but not from the render