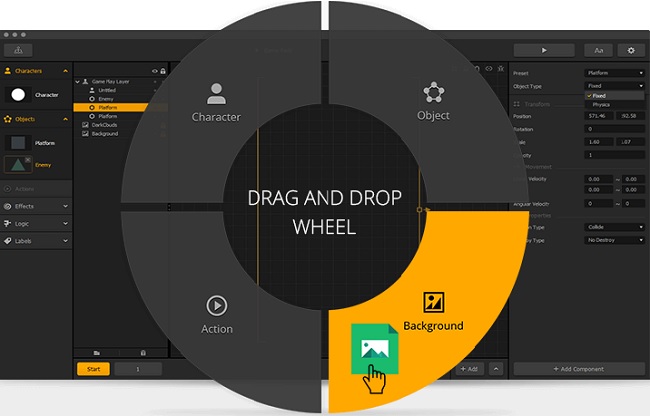 Info:
Make games without programming. Buildbox is a breakthrough game creation experience. Creating games is as easy as dropping images into the software, making changes to their properties and hitting play. Every tool you need to complete your game is included inside Buildbox. You have access to complete management of your assets, integrated level editor, game menu system, advanced ad and in app purchase solution, font editor, gameplay settings and more.

True Drag and Drop Creation
With Buildbox, creating games does not require any programming or scripting skills. Simply import images, assign them properties and move them around your game scene. Use one of our many presets to get started and preview your game in real time.

Unlimited Gameplay Possibillities
With Buildbox 2.0, the possibilities are endless. You can now create nearly any 2D game imaginable with the help of our gameplay settings, character settings, logic pieces and new component control.

Chart Topping Games Made Here
Since it?s release, Buildbox has made more Apple Features and Top 100 hits than any other drag and drop game builder.

Insanely Fast Development
Buildbox is the fastest development tool ever created. Hit games like Color Switch and The Line Zen were made in a a single week using Buildbox? and that?s just the beginning.

ADVANCED FEATURES
Our advanced features allow you to expand the possibilities of what you can create. Mix and match components to make your game uniquely interactive. With the advanced options in Buildbox you can easily make games like some of the top game publishers without any programming or coding knowledge.

Character Components
Advanced components widely open Buildbox 2.0, letting you create new control styles, gameplay types, special attacks and abilities. These components add a lot of character functionality and are very easy to use. Along with damage, health and character icon, you have the option of advanced move and ghost jump.

Object Components
Components to objects work in the same way as character components. You can use damage component to attach damage to various moves and health to attach or include multiple lives. There?s also the option of friction that makes platforms move like ice. You can easily make enemies move, platforms rotate or boxes fall from the sky. Determine when an object will ??wake up?? and start to move or have it only start to move when a character collides with the object or until the character reaches a certain distance. You can bring your game to life with our advanced components.

Collision Editor
With the collision editor you have more flexibility as a game designer. You can easily edit the collision shape of any character or object, without changing the sprite image in your game. To edit an object?s collision shape simply enter the editor and change the shape by clicking and dragging and then dropping any of the circular points that define it. Add points to the shape or remove them. There?s auto shape options available also, for quick editing. At any time you can enter the Debug Mode to test and make sure your game is running as smoothly as possible.

Sprite Editor
Buildbox also allows you to easily animate and customize images. You can drag and drop any PNG image into the editor. Resize or scale it down to fit perfectly into your game?s scene. Like magic, create animated sequences and cut scenes using the keyframe animation feature.

For additional functionality, you can open up the sprite editor to see a visual layout of your game?s sprites. Use the number of sprite sheets to determine how large your exported game will be and tweak them to achieve a better app download size. All of the necessary tools that you need to create a professional looking game is at your disposal.