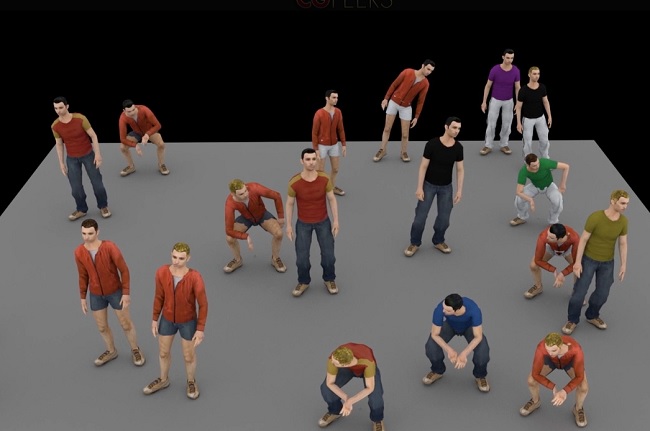 Info:
Golaem Crowd is an artist friendly crowd simulation tool for Maya used in production by a long and growing list of visual effect studios. With Golaem it?s easy to create diversity and apply behaviors to create natural looking crowds in a shorter time than has traditionally been possible. This introduction course assumes no previous knowledge of Golaem Crowd, but covers all aspects of the software and is based on direct production experience, so even existing users should find something new to learn.

After an overview of the software to give a sense of how the various tools work together, we?ll go through each element of Golaem Crowd in the order they?d be used to build a shot, from integrating custom Maya assets to crowd distribution, behaviors, simulation and rendering. While the course is pegged as introductory, it will quickly progress to cover more difficult subjects and more intermediate-level techniques.

Gareth Stevenson has been working as a 3D Generalist in London since switching over from the Videogame Industry, where he was at Microsoft. He?s worked on film projects including Hugo, Hunger Games and Star Trek: Into Darkness and TV series including Game of Thrones season 2 and 3. Most recently he?s been working with Golaem Crowd at Union Visual Effects in London, where he?s taken care of all 3D crowds on Davinci?s Demon?s Season 2, Stephen Frears? Lance Armstrong Biopic and Suffragette.

Class 1: Overview and First Crowd Setup. We’ll touch on each of the main tools as we go through the process of setting up a basic spectator crowd, from an empty scene to render. You’ll get a feel for the overall crowd workflow and an understanding of how the different parts of Golaem work together.
Class 2: Character Maker – Skeleton Definition and Motion Conversion. We begin the conversion of Maya assets to custom Golaem Crowd formats by translating our Maya character skeleton into a Golaem Character Definition. We’ll look at some of the animation editing tools, output a Golaem animation file and learn how to translate animation from one skeleton to another. Finally we’ll take a look at a custom character set up for a crowd, a hybrid cyclist/bike skeleton.
Class 3: Character Definition and Asset Management. Continuing to set up our Maya assets, this week we’ll look at how we use character geometry and materials in the crowd. We’ll set up a custom character, learning how to switch between multiple pieces of geometry and materials on a single character type and some tricks we can use to create additional visual diversity.
Class 4: Entity Distribution/Placement. Now we have our crowd assets we can start to place them in an environment. We’ll look at various techniques that allow us to do this, from the standard population tool to the paint tool and generating particles from an image.
Class 5: Behavior Editor – Tools + Motion and Geometry Behaviors. In this class we’ll start to examine ways we can create behaviors for our crowd entities. We’ll learn about the nodes we can use to build behavior trees such as logic operators, containers and stop/start triggers. We’ll then take a look at the geometry behavior, demonstrating how to use a cached nCloth sim with our crowd.
Class 6: Behavior Editor – Character Locomotion. The locomotion behavior enables us to have walking crowd characters that use ground adaptation and dynamically switch animations. We’ll set up a walking crowd and spend some time with related elements including navmesh creation, obstacles, goto and navigation behaviors.
Class 7: Behavior Editor – Additional Behaviors. We’ll go through some additional behaviors and settings that can be used with our crowd characters, such as ‘constraint’, ‘formation’ and ‘look at’ behaviors. We’ll also take a look at the flocking behavior that can be used for groups of birds and other flying creatures.
Class 8: Simulation and Rendering. Taking a break from the behavior editor, we’ll go through the process of simulating and rendering our crowd. We’ll look at ways we can manipulate our sim to improve our final result and various settings that may be useful.
Class 9: Behavior Editor – Physics. Back into the Behavior Editor one last time to show how we can integrate ragdoll physics and forces with our crowd characters. We’ll set up a scene with guys falling over obstacles, falling over each other, rolling down a slope and getting thrown onto the ground by an explosion. We’ll see various techniques we can use to achieve effects like these and how to deal with the issues that arise.
Class 10: Production Tips and Tricks. We’ll look at some useful techniques across several areas of Golaem, including ways to iterate more quickly on your simulation, making global changes to all crowd fields, how to create greater visual diversity from just one texture, quickly editing animation files and how to set up avoidance for non-crowd animated elements in your scene.