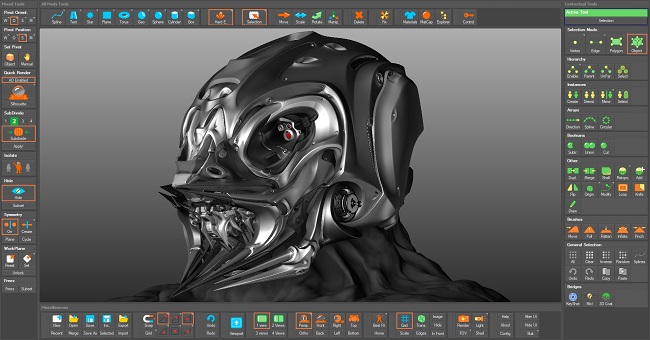 Modeling with Rocket 3F is like drawing – very Simple and Inspiring! The Most important feature of Rocket 3F is Workflow! It is Fast Fun and Friendly!
The software ? the ?3F? stands for ?fast, fun and friendly? ? is intended to give concept artists and designers a more intuitive route into 3D modelling than conventional DCC software.

From the developer of Nvil : Rocket 3F shares a code base with Nvil ? formerly known as VoidWorld ? Kun Shi?s existing modeling software, which also remains in active development.
Offering a highly customisable toolset and user interface, Nvil has been described by users as an extremely quick modeler, although time-consuming to set up.
Rocket 3F looks to preserve some of the unique features of Nvil, but with a workflow geared more towards artists who are new to 3D modeling.

Solid basis poly and sub-D modelling tools, plus a few interesting features
The software includes a standard basic range of tools for creating and editing polygonal and sub-D geometry, including a scene hierarchy and simple array, Boolean and instancing functionality.
More unusual features include the workflow, which is geared towards mouse or stylus-only input, and what Sarmadac describes as ?absolutely unique? crease tools. There is also the option to display models in silhouette-only mode, which looks useful for concept design.

Rocket 3F also comes with bridging plugins to intuitive NURBS modeler MoI, voxel sculpting and retopology tool 3D-Coat, and Luxion?s KeyShot renderer.
Feedback from early testers ? this thread on The Foundry?s forum dates back to the beta release ? has been broadly positive, with criticism centring mainly around the visual style of the UI, which was described by one poster as having an ?ice-cream shop look?.

Updated 4 April 2017: The Rocket 3F developers have released a new Pro edition of the software, enabling users to customize the key bindings and interface, and to set up their own custom composite tools.
You can see how the new functionality works. Since we last wrote about Rocket 3F, there have been a steady stream of updates ? you can find the change logs here ? adding, among other things, new modelling tools like Cap and Multi-Bridge, and an interesting-looking Pattern Selection tool for selecting repeating arrays of faces on the surface of a model.
The developers have also gone some way towards standardizing the UI, with a new dark theme and, in the most recent 1.3.5 update, support for single, quad and ortho views in the viewport.
Rocket 3F has a bridge to 3DCoat! Creator of Nvil – IStonia – is making rocket3f software with collaboration of a 3d guy (ui, marketing). Nvill was/is great modeling software, and even Blender is not as good as as Nvill in the modeling department.