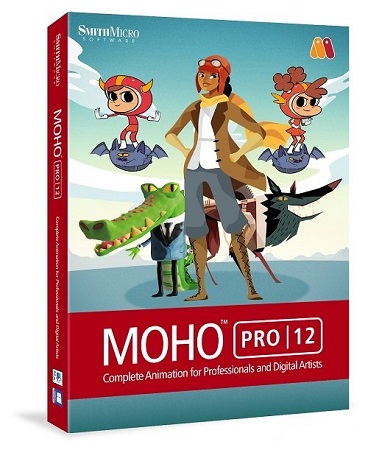 Info:
Moho? Pro 12 is perfect for professionals looking for a more efficient alternative to traditional animation. With an intuitive interface and robust features such Smart Bones?, Smart Warp, Bezier handles optimized for animation, frame-by-frame tools, a professional Timeline, physics, motion tracking, motion graphs, 64-bit architecture and much more, Moho? Pro 12 delivers advanced animation tools to speed up your workflow and combines cutting-edge features with powerful technology for the most unique animation program for digital artists.
Everything you need to make amazing, professional animation. Moho? Pro 12 (formerly Anime Studio Pro) offers the most powerful 2D rigging system of the market and mix it with traditional animation tools, allowing to get professional results easier and faster.

Revolutionary Smart Bones?
Smart Bones is an incredible feature that reduces or entirely removes distortion around your character’s joints – specifically around knees and elbows. Group a set of points and use the Smart Bones control levers to create 3D looking motion that you can easily repeat with the turn of a dial. For example with Smart Bones you can control facial expressions and head-turning on a character with simple dial movements instead of having to touch each bone point. Smart Bones not only steps up the quality and realism of the bone actions, but makes it MUCH easier to repeat complex movements and control your rigged elements. Smart Bones allow the ability to control Switch layers, Layer order, Layer visibility, Follow path, Flip layer horizontally/vertically, Stroke exposure, Shape effect positioning, Shape effect parameters (like gradient colors), 3D thickness of vector shapes that have been converted to 3D and even more smart bones controls.

Bone Constraints
Several major enhancements have been made to Moho’s bone features. The new bone constraints feature will include rigging options that will help set up characters that are more complex and powerful. The independent angle constraint allows a bone to maintain its global angle similar to a camera crane and is not affected by inverse kinematics or its bone parents. Ideal uses for bone constraints include robotic arms or feet on characters that maintains constraints when the rest of the leg is moving. The squash and stretch bone scaling enhancement allows bones to squash and stretch objects. The elbow bending feature helps improve otherwise abnormal bending and squashing issues. New target bones help bones point in the right direction rather than having the need to consistently set angles. Other improvements in bones include an updated inverse kinematic solver and automatic bone scaling.

FBX Support for Unity? Game Developers
Unity? game developers and users will now be able to use FBX support of animated 2D content in Moho Pro, eliminating the need to create rigid sprites for game development and providing the ability to get the exact look and feel that they want. FBX, the adaptable file format for 3D animation from Autodesk?, is the most common method for integrating animated 2D and 3D assets in Unity.