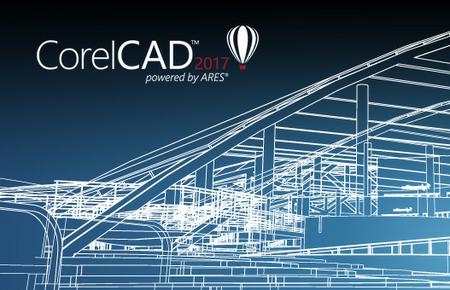 Info:
Make the best choice in computer-aided design software with an affordable powerhouse that delivers an intuitive UI, industry standard and customizable tools in an interactive environment. CorelCAD? 2017 delivers the sophistication and precision you need to exceed the CAD results you expect in 2D drafting and 3D design. Work in a familiar environment as CorelCAD 2017 uses .DWG file format natively, offering compatibility with all major CAD programs. Additionally, CorelCAD 2017 provides flexible options, such as add-ons and plugins, for both new users and existing customers to match any workflow.

Patterns along paths (New!)
Utilize the new Pattern commands to create copies of specified objects along a path. The established path can be in various shapes, such as a line, polyline, arc, circle, ellipse, or spline, plus the alignment options will control the pattern?s final appearance.

Centerline construction (New!)
Establish exacting centerlines between pairs of lines, arcs, and polyline segments and even set the extension for centerlines to exceed the shapes that define the contour. Best of all, the specific LineStyle for centerlines is assigned automatically.

Trimming options (New!)
Cut quickly with confidence using the handy Trim and PowerTrim tools to precisely edit hatches and solid, single-color or multicolor-gradient fills. Once the divisions are made, the resulting hatch and color fills will maintain their association to subsequent boundary objects and remain as one object.

Object snaps and EntityGrips (Enhanced!)
Use CorelCAD smart tools, such as object snaps, grips and polar guides, to quickly reposition, align, copy or resize objects. Save valuable design time with a faster on-screen editing tool. Simply use the contextual shortcut menus to instantly edit the geometry of objects in place when you hover over any EntityGrip.

Print dialog (Enhanced!)
Enjoy enriched functionality with a redesigned print dialog box that improves the user experience. The print preview now updates dynamically when you change any of the print settings, and it shows an optimized preview of the image before you print.

Object moves (New!)
Use the ChangeSpace command to move objects, such as a title block or part list, from your Model workspace to a Layout sheet or vice versa. During the command process, the selected objects will be scaled within the new workspace to maintain its visual appearance.

EditXBlockAttribute (New!)
Modify the BlockAttribute values and properties of your inserted Blocks within any drawing to display relevant information about a particular piece or component as text, such as a quantity, weight or other characteristic. With this new functionality, you can also format the attribute text so it will be visibly different and separate from other attributes in the drawing.