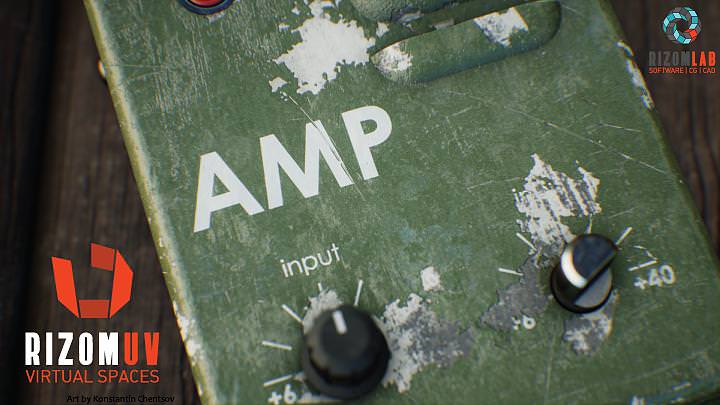 Info:
Today, following the path towards an ideal tool set capable of segmenting, flattening and packing UVs without any manual intervention, Rizom-Lab focuses on enhancing our technology, and making it available to 3D artists and product designers within our new standalones applications RizomUV Virtual Spaces and RizomUV Real Space, and in a form that can be integrated into others 3D editing softwares or pipelines within our RizomUV C++ Library.
Games / VFX / Animation / VR
Since 2004, Unfold3D legacy has taken its place in major VFX studios, AAA games companies and animation studios all over the world thanks to its famous unfold feature and its intuitive UI. RizomUV Virtual Spaces takes back all this background and comes with major improvements.

If symmetry is enabled, and if your model is symmetric, the generated seam network will also be. This character model has been cut in a single mouse click using the new Hierarchical Autoseams feature. This feature, looks for the simpler seam line network that open your mesh without segmenting it into several separated parts. After being unfolded, you’ll get the well-known flattened shape like the one below.

Massive mesh pack (+80000 islands, +700k polygons), packed in less than 15 seconds. Island’s holes and concave areas are filled recursivelly by smaller islands so that all the UV space is efficiently used.

INTEROPERABILITY
RizomUV Virtual Spaces loads and saves OBJ and FBX files. Material’s polygons groups, smoothing’s polygons groups, and polygons groups, are loaded, exploited, and re-exported.
To improve RizomUV’s integrations into studio’s pipeline, or your in house workflow, custom Lua scripts can remote control RizomUV from any other application, or even from a simple text editor, thanks to the script file monitoring feature. It is then so easy to add to your favorite 3D app, custom press buttons to load and save (even launch Autoseams, Unfold, Pack …) to exchange mesh data and automatize partly or fully your unwrapping jobs.

Optimize
A robust stretch and compression minimizer, able to handle multiple types of hard and soft constrains and symmetry