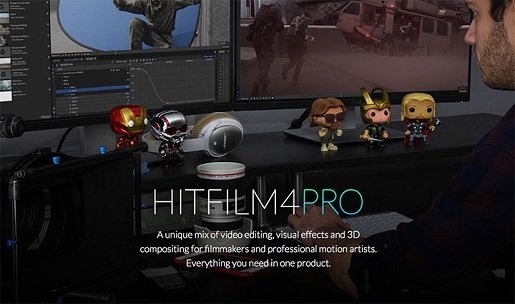 Info:
A unique mix of video editing, visual effects and 3D compositing for filmmakers and professional motion artists. Everything you need in one product. Want to create epic videos on a budget? HitFilm brings even your biggest ideas to life. Create beautiful title sequences and sophisticated motion graphics. Take your channel to the next level with HitFilm’s all-in-one video editing.

Everything is possible
HitFilm 4 Pro is the only video software that includes everything you need to create huge scale movies on an indie budget. All those times when you had to limit your ambition – that’s in the past.

3D objects
Add 3D objects to your scenes – anything from helicopters and spaceships to the Empire State Building or your production company’s logo. Animate objects and shoot with virtual cameras and lights, with real-time shadows, reflections and physically-based lighting producing beautifully photo-realistic results.

Visual effects
No other video editor is capable of creating effects on this level, from procedural muzzle flashes, lightning and fire to cloning, lightswords and automatic heat distortion. There’s over 200 effects in the library, all of which can be re-mixed and customized to design your own.

Grading
HitFilm is packed full of color correction and styling tools. Enhance your entire frame or specify custom areas, such as an actor’s eyes or the sky in a wide landscape shot. Doesn’t matter whether you’re shooting on a DSLR or a RED Epic – HitFilm will make your movies look like a million dollars.

Get animated
Given the right tools you can build anything. Use precise animation, advanced titling and procedural effects to design exciting motion graphics.

Titling
From advertisements to end credits, we make words matter. HitFilm 4 Pro includes the premium 3D Objects plugin from Boris FX for all your titling needs. Your titles can be customized using all of HitFilm’s advanced compositing and effects tools.

Animation
You have complete control over your animations, with a powerful keyframe graph editor and bezier paths. If you’re working with 3D models you can animate inside HitFilm or import elaborate, pre-made Alembic sequences.

Particle engines
Everyone should have a world class particle engine. HitFilm 4 Pro’s got two? Create weather systems, grow your own cities or summon swarms of creatures – it’s all here, from grid patterns and fractally-warped, audio-influenced 3D forms to chaotic, physics-driven simulation.

Always be creative
It’s the perfect blend of editing and compositing, which means you get everything you need right at your fingertips. You can experiment and be creative all within a single, easy-to-use interface.