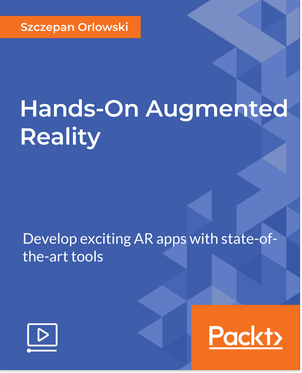 Info:
Previous-generation AR apps were limited to events triggered by markers. Now experiences can be rooted in the user’s space and context. This critical shift requires developers to update their skills as well as their thinking. It’s time for you to go AR-native and build relevant, smart apps that people want to use for practical reasons.
This course will make you fluent in innovative AR development and boost your out-of-the-box thinking to advance your career! We will create apps people want to explore and use, build a robust portfolio, and deploy course projects to app stores. We will make an interactive speaking companion, a multiplayer app enabling you to collaborate on landscape design, and a VR-enabled AR environment customization app where you can alter the surfaces and lighting of your room! Unity 3D is the undisputed leader in providing a scaffolding for complex AR/VR, which has been proventime and again with the native AR Foundation. we will be using throughout the course.

What You Will Learn
Build powerful AR apps with cutting-edge AR Foundations in Unity 3D or build interactive AR apps with the leading SDKs in Unity 3D.
Create responsive and real-world applications that you can showcase and deploy to the App Store.
The future is wearable: combine ARCore/ARKit with VR.
Implement powerful, modular interface-design techniques using device sensors, uploaded, inputs, gaze mechanics, and more.
Evaluate the state of AR to understand where best to direct your efforts in the future.
Create unique AR applications from scratch.