This 2-disc set takes an in-depth look at the design and creation of a detailed character head using Pixologic?s ground breaking software ZBrush. In over eight hours of lecture, Alex Alvarez sculpts a head from scratch using Zspheres and ZBrush?s arsenal of sculpting and detailing tools.

Beginning with primitive shapes derived from Zspheres, the primary forms of the head are quickly blocked out to determine general proportion and design. Alex then refines the eyes, ears, nose, mouth and horn regions before moving into Projection Master to create surface details. Once the geometry is complete, the use of ZBrush as a texturing tool is demonstrated in the creation of high-resolution bump, color and specular maps. The creation of custom tileable Alpha libraries with ZBrush and Photoshop is also demonstrated. In conclusion, Alex shows how to integrate geometry, displacements and textures using Maya’s native renderer and Mental Ray. Every step of the process is shown using real-time and timelapse video. 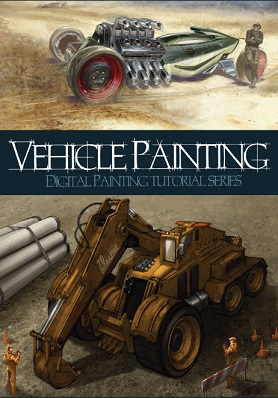 This tutorial eBook takes an in-depth look at the process of designing vehicles, beginning with the concept stage and following through to a final design. The tutorial covers sketching approaches used to evolve and refine an initial idea, and shows the techniques used to produce a number of drawings, exploring a variety of designs.
The tutorial then moves on to creating a finished design, placing the vehicle in a simple scene and addressing the issue of rendering the various materials that make up its construction. The importance of perspective is explained before concluding the tutorial concludes with a chapter on adding design details and lighting effects.

All 12 teams cars in LWO and OBJ format, with all the textures… Each cars steering wheel is a separate object to the car model ( so in each folder you will have a car model and a wheel model) the wheel is counted as the whole interior so they are quite detailed and hence why a separate model.

There are a few issues with these models but they are only minor…
#1 only the diffuse (colour) maps are assigned, the specular and normal maps are in the folders but they are not assigned.
#2 The UV mapping of the tyres/tread isn’t correct for some reason so you may have to tweak the UV layout slightly to make it work ( really shouldn’t be a problem for anyone that knows 3d )